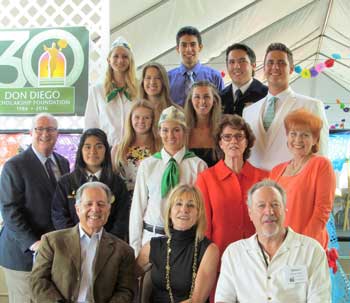 The 2016 Don Diego Scholarship Foundation recipients with members of the Board of Directors at the 2016 Gala.

Del Mar, CA …    The Don Diego Scholarship Foundation’s annual Dinner and Concert Gala on June 30, 2016 at the San Diego County Fair was a spirited celebration of 30 years of building a better San Diego, one scholarship at a time.

Set against a backdrop of colorfully whimsical décor in accordance with the 2016 “Mad About The Fair” theme, the elite sixth floor of the Turf Club came alive with guests eager to meet Don Diego’s 2016 Scholarship Recipients and mingle with Board members and Sponsors representing the best of San Diego as they enjoyed the panoramic view of the Fairgrounds and Pacific Ocean.

The Gala, which benefited Don Diego’s educational programs, offered an exuberant coming together of past, present and future, which culminated this year in $40,500 awarded to 12 college-bound students for a 30-year total of nearly $800,000 in scholarships and grants.

Chair Jon Liss told the audience, “Our Mission is to provide scholarships to deserving San Diego youth who are associated with activities at the Del Mar Fairgrounds, including the San Diego County Fair, and are pursuing their educational interests. We also provide grants for agricultural education. Your participation in this Gala and in our Amigo, Legacy Brick and Plant*Grow*Eat programs enables us to continue our Mission. Thank you.”

Executive Director Chana Mannen believes, “The accomplishments of these and our other 2016 Scholars bode well for their future as well as for the future of our community, and our country. All of us at Don Diego feel privileged to contribute to these outstanding young adults and greatly appreciate our Foundation ‘friends’ for their support.”

The Don Diego Scholarship Foundation was named for Don Diego, AKA Tom Hernandez, who served as the Fair’s welcoming goodwill ambassador from 1947-1984. Since its inception in 1986, the Foundation has awarded approximately $797,000 in scholarships to 177 students and in agriculture education grants. Information on Don Diego’s history and the Foundation’s current programs and donation opportunities is at staging.dondiegoscholarship.org and www.facebook.com/DonDiegoScholarship.