A Tale of Two Sisters: Nicole and Alyssa Arias 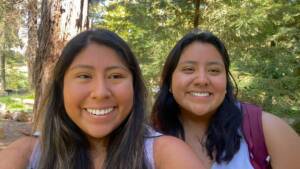 “Our mother, Rosalina, immigrated from Oaxaca, Mexico when she was 20. She worked as a nanny, learned English, and used her skills to become a paraprofessional. Our father, Josue, immigrated from El Salvador at age 16 to escape the Salvadoran Civil War. He worked his way up to become Julian High School’s head of maintenance. Their journey to success was not always easy. There were times when all we ate were PB&J sandwiches, just to make the mortgage payment.”

In 2020, Valedictorian Nikki won Don Diego’s $20,000 CGW Family Foundation Scholarship funded by the family of Board Vice Chair John Hoeflich, covering four years of matriculation at UC Davis, where she majors in Managerial Economics with an emphasis in Business Economics and Agriculture Business Economics. As she works toward becoming a veterinarian, this extraordinary Scholar- Leader continues giving back to FFA and her Julian community.

In 2022, Valedictorian Alyssa won Don Diego’s Juanita Hayes $2,500 FFA scholarship funded by Board Chair Hayes, which she is using to join her sister at UC Davis this fall. Alyssa’s stated goal: “To pursue a career as a lawyer. My dream is to work for the UN!” Along the way, she says, “I want to become an immigration lawyer to help people like my parents who want to come to the U.S. to change their lives; people who believe in the American Dream.”

The Arias family embodies that Dream. Rosalina and Josue Arias burst with pride as they proclaim, “Our girls are a huge blessing to us. We believed our children should do better than ourselves, and here they are, both UC Davis students! Being first-generation college students is thanks to their hard work, and we thank Don Diego for believing in them.”